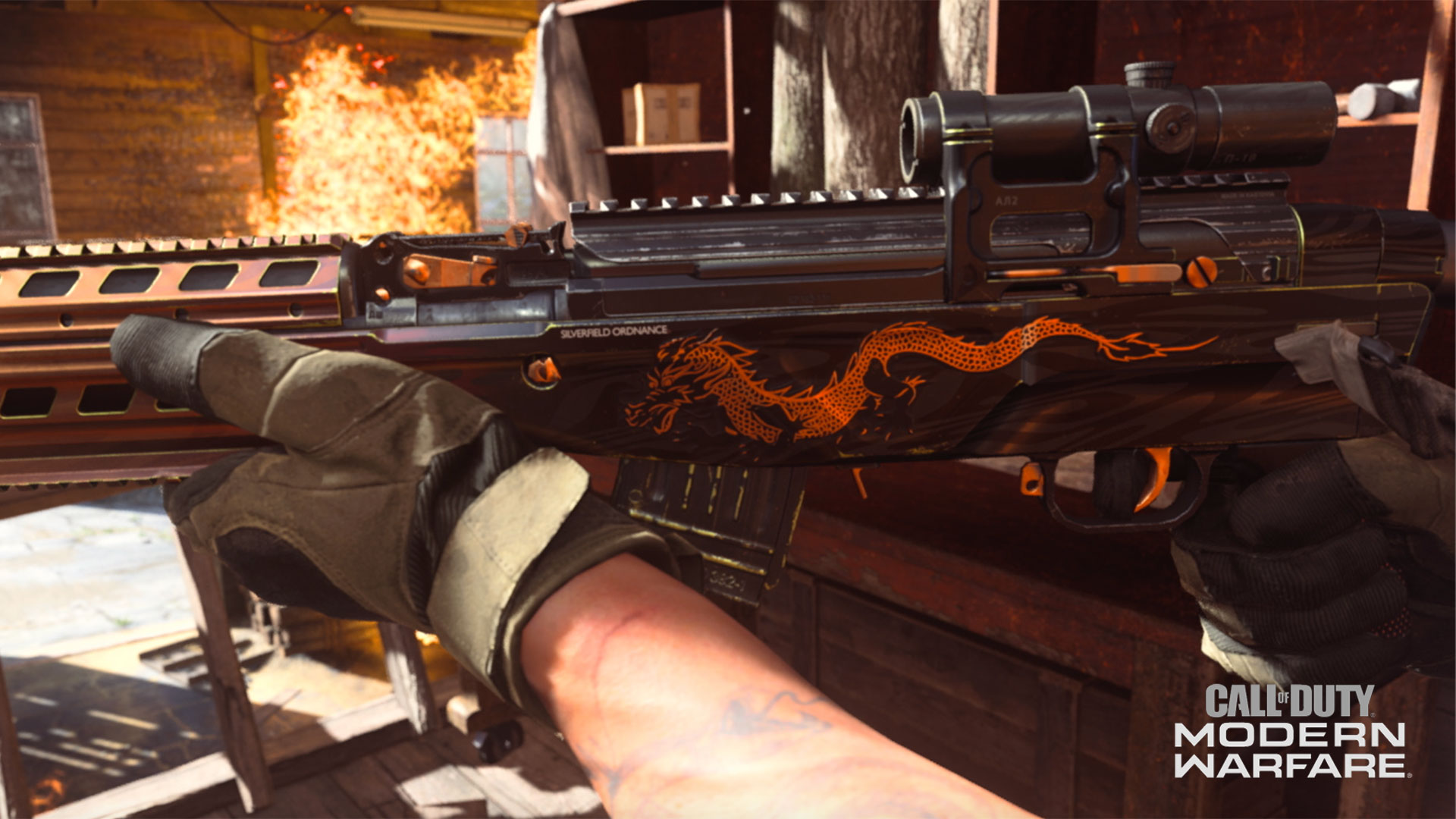 Unlocked at Tier 31 in the Season Three Battle Pass, the SKS is a hard hitting and agile weapon that focuses on utility over accuracy, featuring a faster fire rate than the other marksman rifles. Its unique Gunsmith options give you the power to tailor this classic DMR into a weapon that best fits your playstyle, whether you’re looking to up its punch at range or boost its handling speed and mobility.

Whether you’ve already unlocked the SKS or you’re still working up the early tiers, this weapon detail will help you make the most of this versatile rifle. Read on for weapon tips and an in-depth look at the Legendary Utility Tool blueprint, as well as two suggested loadouts for Multiplayer and two for Warzone so you can dominate with this weapon no matter where you play. 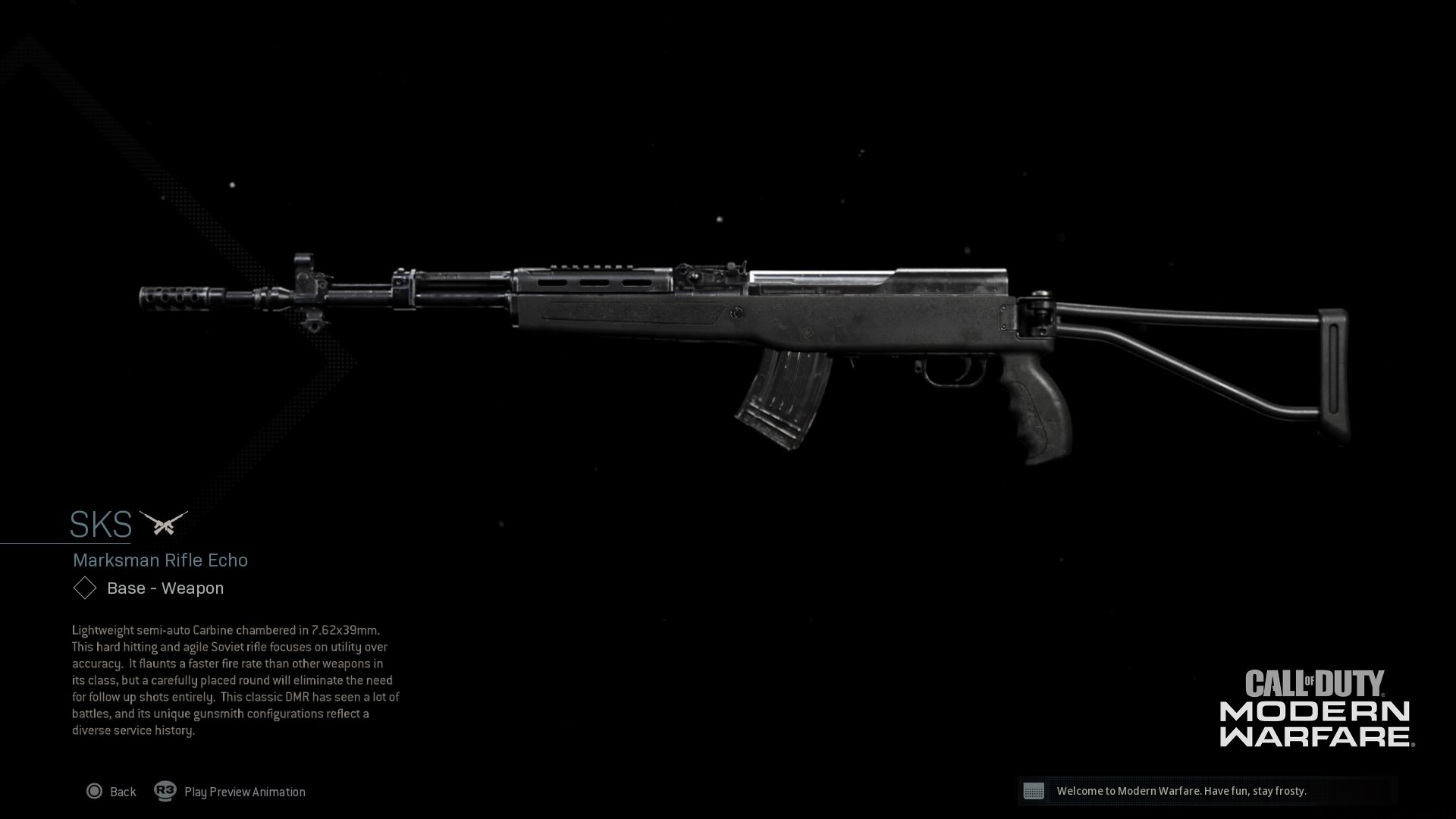 The SKS comes equipped with 20-round magazines firing 7.62x39mm ammunition. It’s got a fast fire rate, but don’t think that means it doesn’t pack a punch. Well-placed shots will make quick work of enemy players, and with the rifle’s manageable recoil and healthy ammo supply it’s forgiving as well when you need to fire several shots quickly.

Add Gunsmith into the mix and you’ve got a whole range of directions to take this rifle in. Kit it out with a long-range optic and a damage extending barrel for sniping duties, or build an on-the-move setup using the Sawed-off Stock and the lightweight 10 Round Mags for improved movement and ADS speed. With this versatile weapon, there are endless configurations to suit your needs in battle.

Available at Tier 100 in the Battle Pass, the Utility Tool Legendary blueprint is as deadly as it is gorgeous, featuring a golden dragon design that perfectly exemplifies the weapon’s lethality.

Try this setup when you first lay hands on the Utility Tool:

The PU Scope’s 7x magnification is ideal for sniping support, offering a clear precision picture that works well at mid-range, too. The FTAC Landmark improves the rifle’s damage range and bullet velocity for those long-distance engagements in Ground War and Warzone, with the FTAC Hunter-Scout adding stability to ensure that each shot hits its mark. And it’s snappy, too — Tac Laser and 10 Round Mags vastly increase the weapon’s handling speed so that you can react in a flash when timing matters most.

If the enemy attempts a flank, knock them down using the powerful Renetti with the Mk3 Burst Mod, and then get back to sniping. In Warzone, the blueprint’s high magnification and damage range extend your lethality against distant targets, whether you’re in a shootout between buildings in Downtown Tavorsk or taking aim at a squad on the move between zones. Our suggested Warzone perks ensure a low profile with tracking abilities.

The SKS has the handling speed to compete against the higher rate of engagements in Multiplayer as well, especially in mid- to large-sized maps or along any of the long sight lines that can be found in every map. Here we replace the first and third perks with Scavenger and Amped to keep you loaded and switching weapons fast when the need arises.

In Warzone, while the clear PU Scope still functions well at closer ranges, we suggest Overkill with an assault rifle for an automatic fire option during heated close- and mid-range engagements. Equip Cold-Blooded to prevent being highlighted in thermal optics and Spotter to help you and your squad home in on enemy strongholds. In all modes of play, Stopping Power Rounds transform the Utility Tool blueprint into an absolute killing machine. 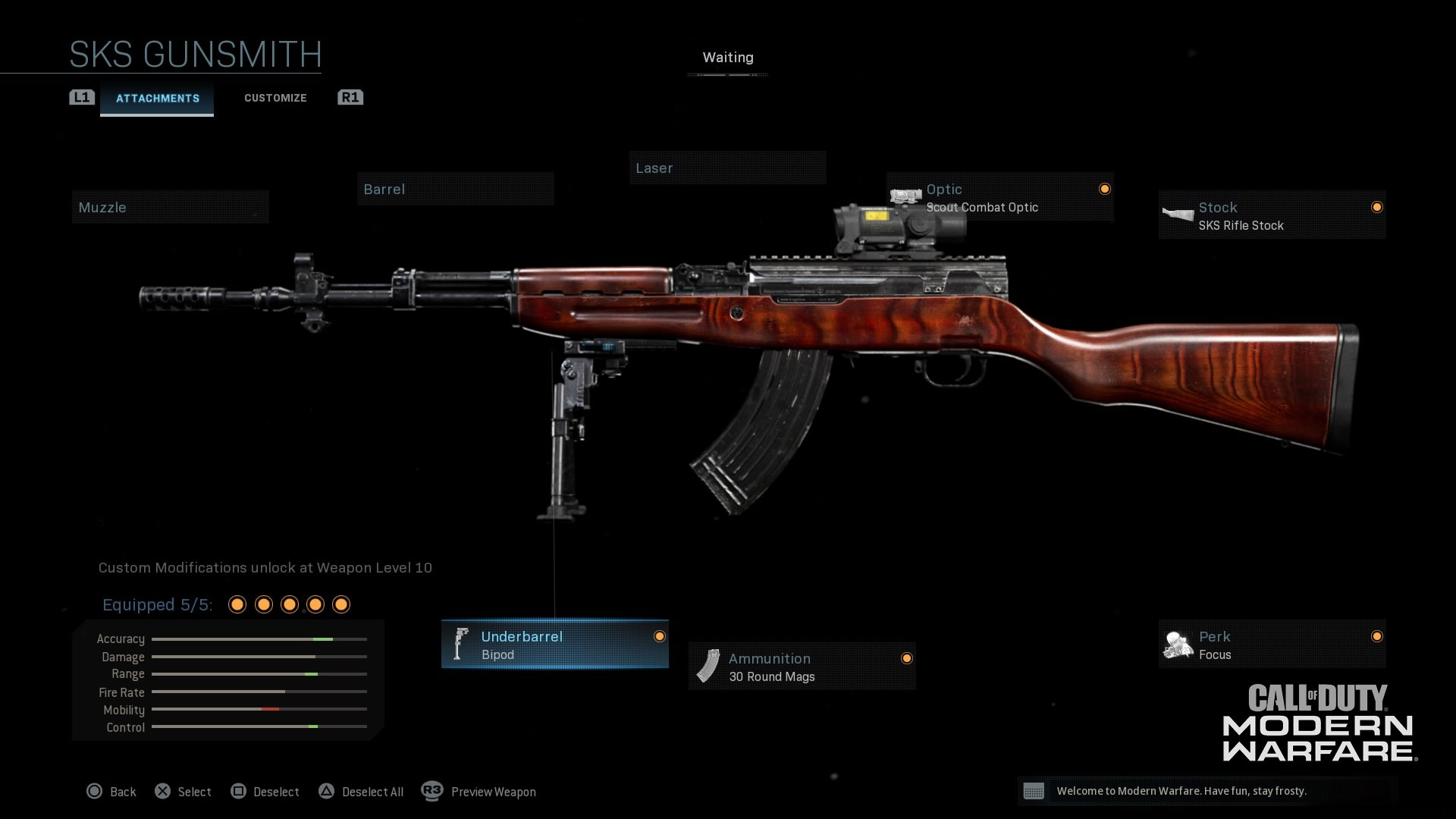 This mid-range loadout is ideal for the fast-paced action in Plunder as well as Battle Royale when you’re escaping the gas or on the move completing Contracts. The Scout Combat Optic lends a precision picture that functions well from a variety of distances, with added stability from the SKS Rifle Stock to help hit moving and far off targets. Crouch or go prone to deploy the Bipod’s recoil control when you really need to zero in. 30 Round Mags minimize your downtime, and Focus keeps you on target when taking damage.

Switch to your pistol of choice for CQB or replace it with another weapon found in the field. Double Time helps you reach power positions more quickly while High Alert reduces your chances of being flanked — tell your squad when it pulses to fend off new threats together. Battle Hardened takes the edge off incoming tactical grenades. In Plunder, Deployable Cover lends protection in a pinch when you’re spotted in the open.

2. On the Move in Verdansk 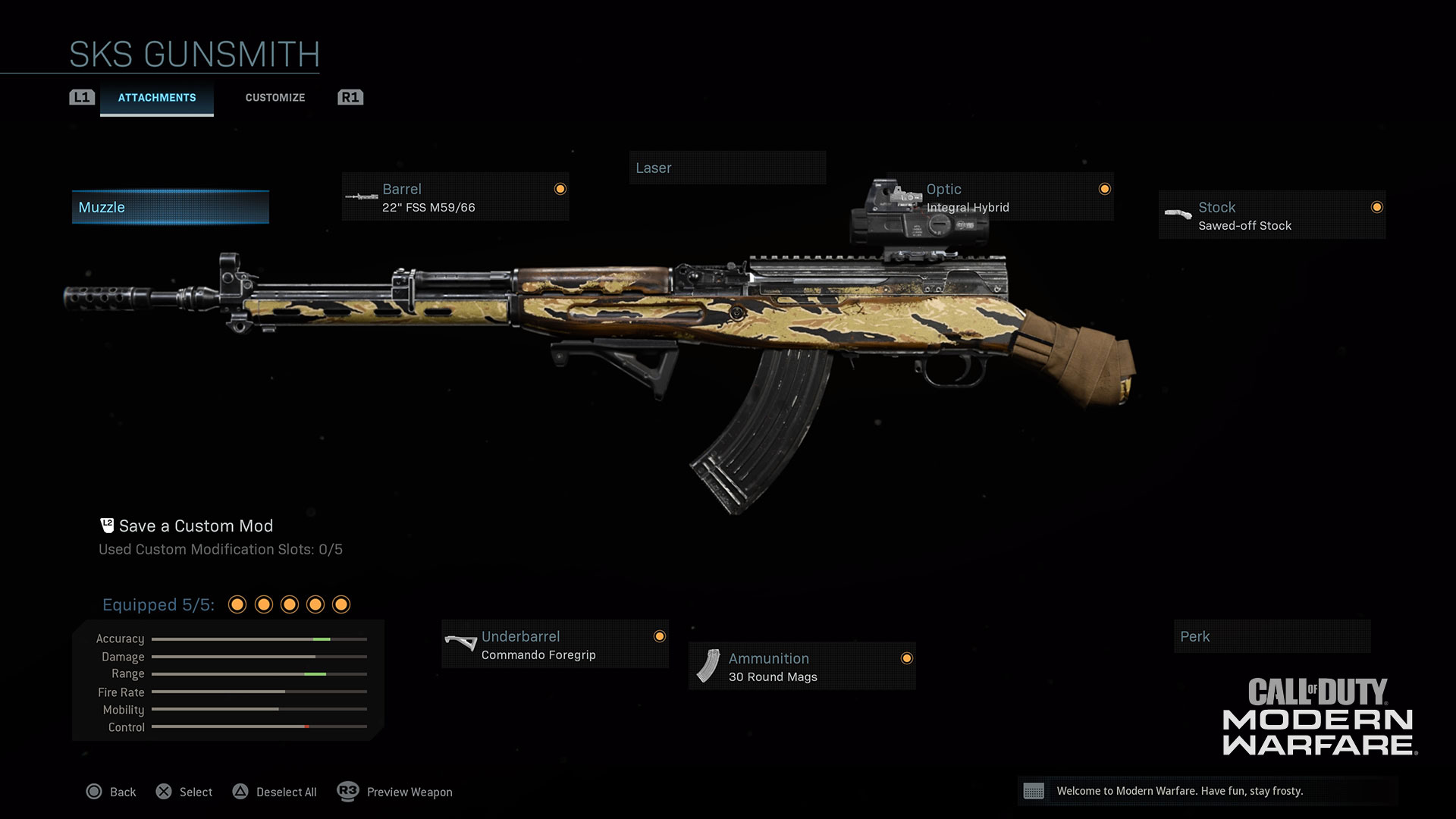 While there is always an opportunity to pick off players at a distance, many engagements, particular during the final circle, happen up close. This SKS configuration gives you a highly agile and devastatingly effective marksman rifle for both the beginning and the end of a match. Paired with a Launcher, feel free to take out enemies on the ground, above, or absentminded cruisers who enter your sights.

The Integral Hybrid gives you the flexibility to switch between fights up close and at range. Your perks all up your mobility and empower you to be even more dangerous in the field. Double Time will help you escape the gas or get behind cover in a pinch, Hardline will lessen the price for Killstreaks when you need them, and Amped ensures you can switch to your Launcher faster to eliminate a vehicle-based foe.

What you give up in speed you make up for in recoil control, stability, and damage range in this Multiplayer-focused Gunsmith configuration. The G.I. Mini Reflex paired with the recoil minimizing Compensator and Commando Foregrip ensure highly stable and precise fire over successive shots. The 22” FSS M59/66 barrel maintains the rifle’s high damage output in long-range fights, and FMJ makes it more difficult for the enemy to find a safe haven behind cover.

Use your launcher to keep the skies clear of enemy threats, and against stronger aerial killstreaks follow up your missiles with shots from the FMJ-enhanced rifle — choppers and VTOLs aren’t such a threat now, are they? Equip E.O.D. for valuable explosive defense, especially useful in Hardpoint, Headquarters, and Domination. Ghost keeps you off the enemy radar and Amped minimizes downtime between launcher shots. The Munitions Box will keep you stocked when you’re on a streak.

Handling speed and mobility are the key points here. The SKS’s clean iron sights are used instead of an optic, with Flash Guard reducing muzzle flash so that you don’t lose your target while firing. The rapid handling speed and mobility come from the combined use of the 16” FSS Para, Tac Laser, and the Sawed-off Stock, all working together for a huge boost in ADS and movement speed, with Sleight of Hand as the fifth choice for speedy reloads.

Quick Fix keeps you healthy between fights, Hardline provides faster access your Specialist perks, and Tune Up to increase the number of times you can use Dead Silence when coming up behind enemy players. The Specialist perks all boost your defensive capabilities, so that the more kills you get, the harder it is for the opposition to exact revenge. This is a great loadout for fast-paced game modes like Kill Confirmed and Cranked.

This is just the start of the possibilities available to you when using the SKS marksman rifle. Have fun using this weapon once you earn it at Tier 31 in the Season Three Battle Pass system, and keep tinkering in Gunsmith as you earn weapon levels to master its near infinite possibilities.